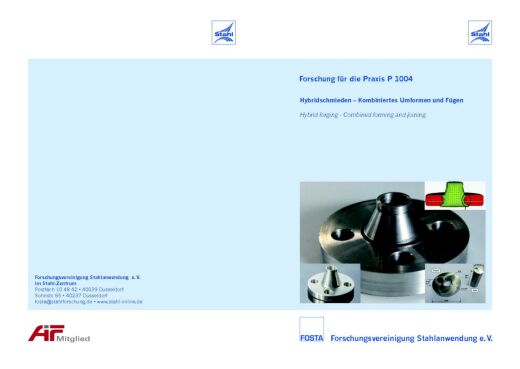 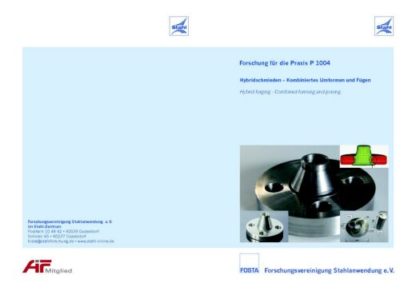 In this study, the feasibility and the potential of a warm hybrid-forging process for a pressure flange were examined. This process is characterized by a simultaneous forming and joining of a thick sheet and a shaft in one step. First, the process was  designed using FEM software. In comparison to a reference process substantial reductions of the press force have been achieved, so that it is possible to forge larger flanges on smaller presses.
As material stainless steel grade X6CrNiMoTi17-12-2 (1.4571) was used. Tests were carried out on an industrially used eccentric press. An essential feature was to ensure the form closure connection of the two elements, since a material connection could not be set. For this purpose, the sheets were prepared with a chamfer and with cavities which have been filled during the forming process with the material of the shaft. Axial and radial displacement should be prevented by this kind of form closure, which was successfully achieved. For this purpose, however, the sheet had to be heated more than the shaft material, otherwise a gap would generate due to different thermal shrinkage after cooling. The press forces have also been reduced. Usually the real forging process with flash requires press forces of about 800 tons. In a conventional flashless forging these forces are higher. Consequently, a substantial saving of the press forces has been achieved.
Forging companies now can produce rotationally symmetrical parts in a manual  production by hybrid forging. This way, parts can be produced without flash with a low forming force. Accordingly tool loads are reduced and die life is increased. Smaller presses can be used for similar parts. An automation incl. feeding is yet to be developed. After that, also long parts can be produced industrially, which take the largest share of forged parts.
The research project P 1004 of of Research Association for Steel Application was carried out at IPH – Institut für Integrierte Produktion Hannover gGmbH. FOSTA has accompanied and funded the research work. 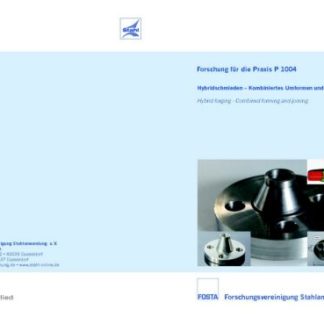