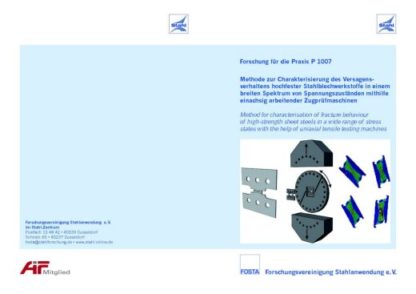 The main objective of the project was to develop a method for characterisation of fracture behaviour of high-strength sheet steels. The method was to be based on shear-tensile tests on new shear-tensile specimens with the help of a new test module in uniaxial tensile testing machines as well as hydraulic bulge tests. The method should allow fracture characterisation in a range of stress states, which is wider than that covered by the conventional forming limit curve. The key element of the method is the new shear-tensilespecimen, which prefer fracture-inducing strain localisation in the material interior and not  at a free specimen edge independent of an external uniaxial load in the specimen plane. For the shear-tensile tests on the new shear-tensile specimens, the new test module was developed and built, which converts an uniaxial test load in the following material loadings in the tested material: a uniaxial tensile loading with a superimposed hydrostatic tension, five different shear-tensile loadings with a dominant tensile or shear part, and a shear-compression loading with a dominant shear part.
With the help of the shear-tensile tests of five different specimen orientations relative to the test load  accompanied by a strain analysis based on a digital image correlation, the fracture strain of a dual-phase sheet steel was determined. Furthermore, with the help of a numerical analysis of the performed tests, the stress triaxiality at a fracturing material point of the specimens was computed. Via a relation of the mean value of the experimentally determined fracture strain with the characteristic value of the stress triaxiality for each material loading, a point for a fit of a material-specific fracture curve was obtained. Along with the five points from the performed sheartensile tests, another point for the fit of the fracture curve was used from hydraulic bulge tests. From the relative position of the six points, it can be seen that the proposed method generally captures the dependence of the fracture strain from the stress triaxiality.
Although the performed work proved general suitability of the proposed method for characterisation of fracture behaviour of high-strength sheet steels, it also revealed possibilities for its further development. Particular emphases of this further development are optimisation of the specimen geometry for suppression of edge cracks, investigation of the influence of the specimen preparation on the test results, improvements in determination of fracture initiation time point and position as well as investigation on the transfer of the test results into the numerical forming process simulation. These emphases are to be handled in new research project of the IFUM in the near future to facilitate the acceptance of proposed method in FEA-based design of sheet metal forming processes both in the academia and industry.
The research project P 1007 of Research Association for Steel Application was carried out at Institut für Umformtechnik und Umformmaschinen, Universität Hannover. FOSTA has accompanied and funded the research work. 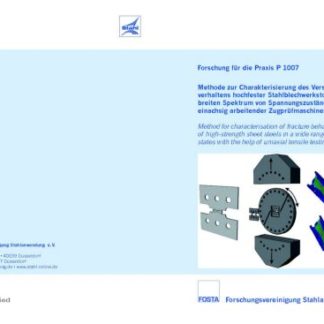 You're viewing: P 1007 – Method for characterisation of fracture behaviour of high-strength sheet steels in a wide range of stress states with the help of uniaxial tensile testing machines 20,00€
Add to cart

All reports in digital form only.

After purchasing, you will receive reports as a personalized PDF document.