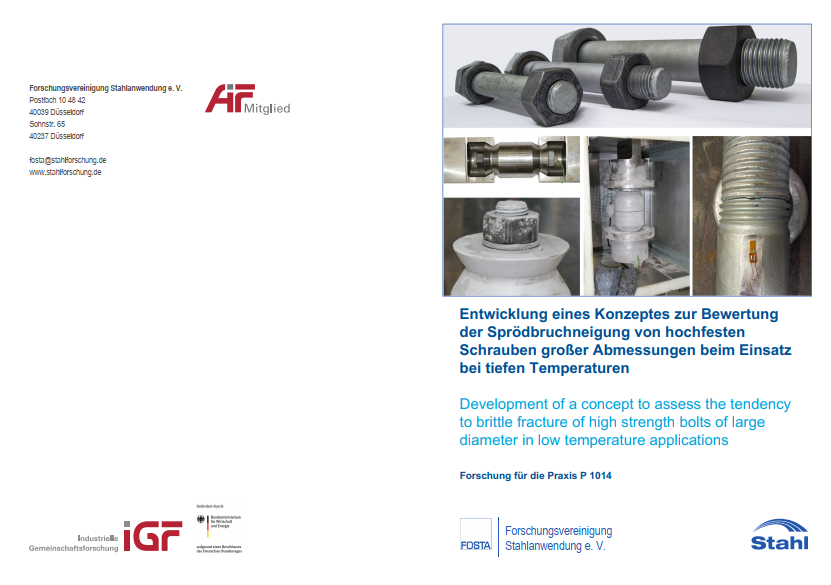 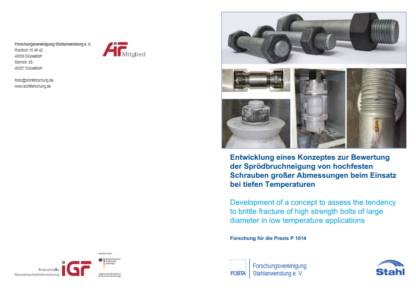 High-strength structural bolting assemblies of the system HV with large diameters up to M72 are increasingly used as preloaded bolting assemblies in highly loaded steel structures. In addition to static and fatigue loads, the connections are exposed to low temperatures. It is known, that the risk of brittle fracture at low temperature applications increases with increasing thickness of the steel material. In principle, this relation also applies to increasing bolt diameters.
In the frame of this research project systematic investigations into the tendency of brittle fracture of high strength structural bolts of large diameters (M24 to M64) at low temperatures were performed. First, the mechanical material properties were
determined. The fracture toughness was described by Charpy impact tests and fracture mechanic tests. The transition temperatures of both tests were correlated by using already existing correlation approaches. The most unfavourable stress state with respect to brittle fracture was determined in the first load-bearing thread of the bolt by the evaluation of finite element calculations. Component tests with bolting assemblies at low temperatures were performed. The bolts were precracked by a fatigue loading. During the tests at -50 °C it could be clearly proved that no brittle fracture occurred at the precracked bolts.
Based on the component tests, fracture and damage mechanical models were
developed to derive minimum toughness requirements to avoid brittle fracture. The results of the damage mechanical model were very conservative so that a conduction of toughness requirements cannot be done without a further  development of the model. The fracture mechanical model is able to reproduce the test results but leads to conservative results by using the nominal toughness values as well. Therefore, the fracture mechanical model needs to be verified under consideration of more test data.
In the frame of the project an assessment of the risk of brittle fracture of high strength structural bolts of large diameters could be done in principle. It is shown that the currently used bolt materials do not show a risk of brittle fracture at applications at low temperatures. 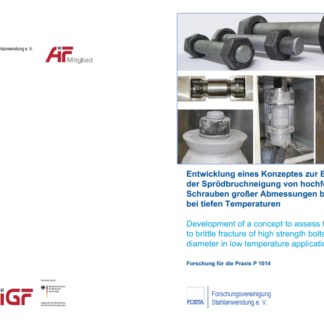 You're viewing: P 1014 -Development of a concept to assess the tendency to brittle fracture of high strength bolts of large diameter in low temperature applications 40,00€
Add to cart