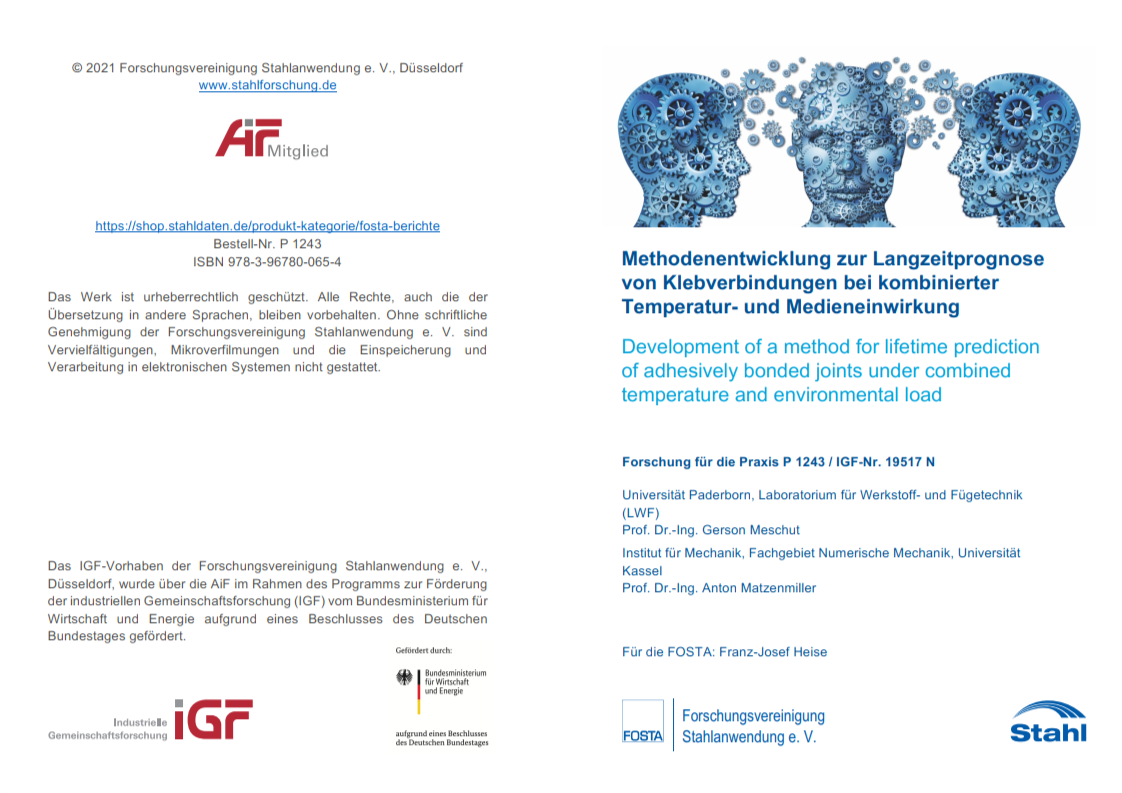 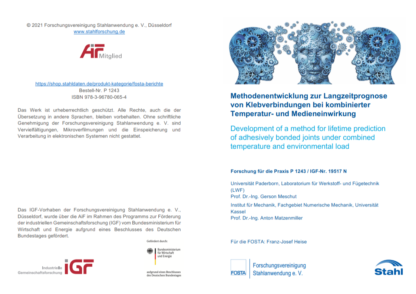 Predicting the aging behavior of adhesives is one of the major unresolved issues in adhesive bonding technology. An essential step towards confidence in adhesive bonding technology and thus towards its increased use is to understand its long-term behavior under hygro-thermo-mechanical stresses. However, most approaches to describing the effects from the state of the art provide only a rough estimate of the lifetime. The water absorption of the adhesive is analyzed by means of gravimetric tests. This results in the diffusion rate and the saturation mass as a function of temperature and relative humidity.
The water sorption of the adhesive layer is modelled with FICKian diffusion. The influences of humidity and temperature on the state of saturation are taken into account. This results in precise investigations of the water sorption of the adhesive and the influence of humidity on the mechanical properties of the adhesive bond. The influence of combined hygro-thermo-mechanical load on the short- and long-term behavior of the bonded joints is investigated using butt-bonded joint specimens (BJS) and thick adherends shear specimens (TASS). For this purpose, the quasi-static strength of the bonded joint is first tested at different constant htm loads. The influence of humidity and temperature on the creep strength is systematically investigated by means of creep tests under different climatic conditions.
The adhesive layer is represented by a substitute model, which consists of a rheological model with damage. The rheological model describes the linear viscoelastic behavior and the damage model captures failure due to htm-loading. The influences of temperature and humidity on the viscoelasticity are represented by the time-temperature-water concentration-shift. The influence of multiaxiality on failure is captured by the definition of an equivalent stress.
The developed concept for the long-term prediction for structural adhesive joints is applied in a case study of the steel sheet specimen. The FE-simulation is performed with LS-DYNA, where the analogy of the thermal and diffusion problem is exploited. The case study shows, how the lifetime prediction takes place on the basis of the transient FE-simulation. Hereby, the influences of the viscoelastic properties on the damage behavior and the resulting rupture times are shown. 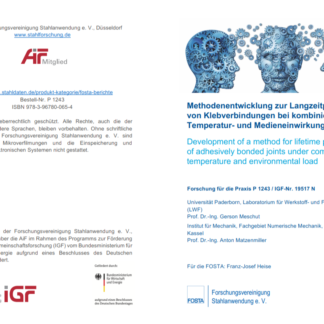 You're viewing: P 1243 – Development of a method for lifetime prediction of adhesively bonded joints under combined temperature and environmental load 30,00€
Add to cart