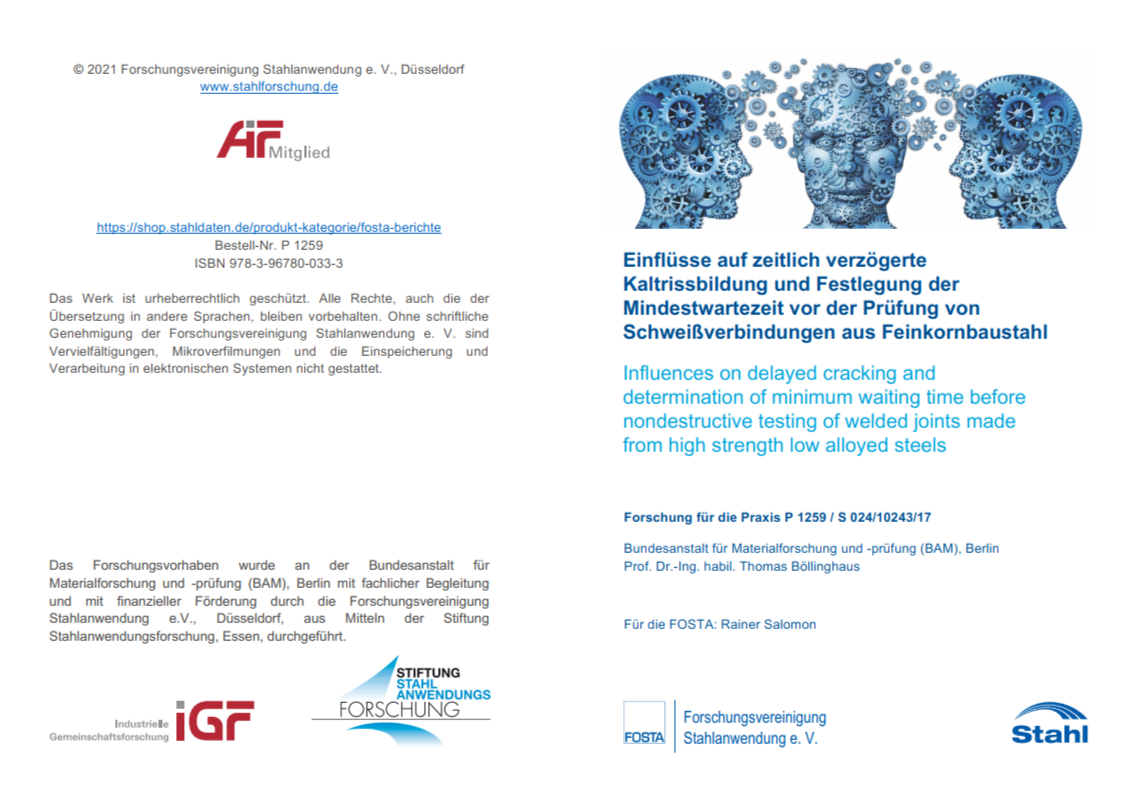 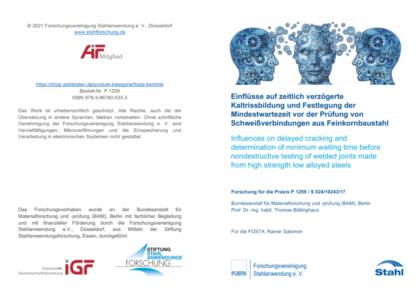 The central challenge for the future is to reduce greenhouse gas emissions up to 55 % in 2030 compared to 1990, by reducing CO2 emissions and phasing out coal-fired power generation. For primary energy production, this poses major challenges that can only be met by renewable energy. Due to large and consistent energy output, energy from offshore wind turbines (OWA) will play a crucial role in achieving this goal. In addition to pure power generation, these will serve, among other things, to produce other alternative energy sources, such as the production of green hydrogen. The rules and regulations welding production is based on contain general specifications on the minimum waiting time (MWT) of up to 48 hours before non-destructive testing (NDT) of the weld seams is carried out. Compliance with this MWT leads to considerable financial burdens in the manufacture of OWA. Modern thermomechanical rolled (offshore) steels have a lower carbon equivalent and thus improved weldability. These steels are currently already available with yield strength up to 500 MPa and can be welded crack-free without preheating and with low heat input. Waiting times of days until NDT can therefore only be justified to a limited extent and require further clarification. The research objective is therefore to develop findings for optimizing the minimum waiting times until non-destructive testing of welds for steels with yield strengths < 500 MPa. To achieve this, welding under variation of hydrogen content and intensity of restraint was done and investigated with respect to the time to appearance of delayed cracks by means of acoustic emission testing and phased array ultrasonic testing, respectively. Supported by numerical simulations, further influencing factors (e.g. heat conduction during welding) and their influence on cold cracking could be investigated with validated models. The investigations showed that the steels used in this study can be welded technically crack-free under controlled welding and environmental conditions. In the welding tests carried out, cracking occurred mainly when hydrogen-containing shielding gas was used. In addition, it could be determined that the multi-pass welding technology has a positive effect on the reduction of the hydrogen concentration and that hydrogen concentration was already significantly reduced after cooling to room temperature. In terms of hydrogen concentration, this has a positive effect on preventing hydrogen-assisted cold cracking. The study also showed that both experimental and numerical methods must be combined to optimize the minimum waiting times until non-destructive testing of the welds. 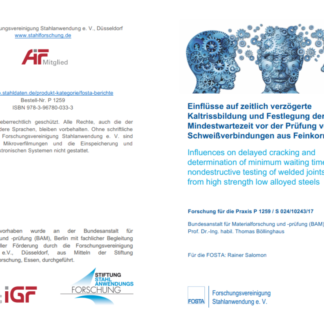 You're viewing: P 1259 – Influences on delayed cracking and determination of minimum waiting time before nondestructive testing of welded joints made from high strength low alloyed steels 30,00€
Add to cart