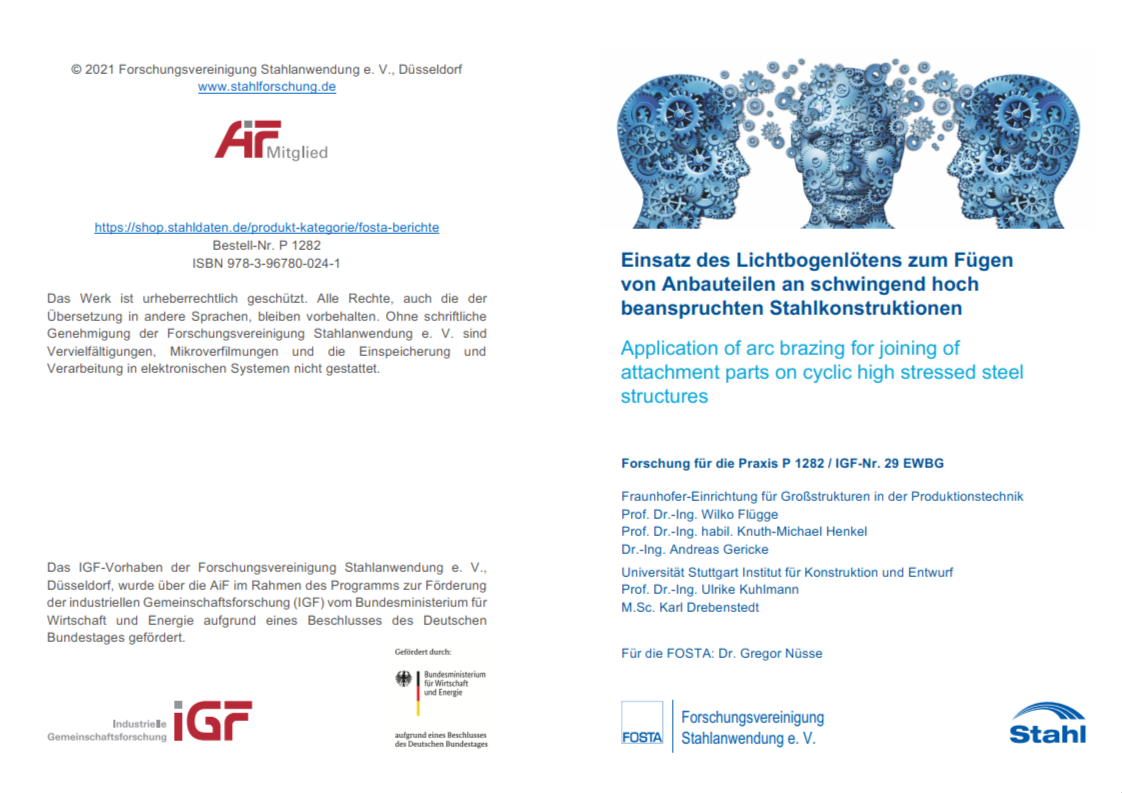 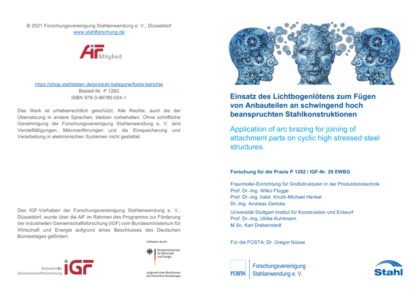 Within the project, arc brazing was investigated as a substitute for conventional welding of secondary attachments on dynamically loaded structures in order to reduce notch effects without additional post-weld treatment in addition to the necessary static strength. Different brazing materials were investigated with regard to their suitability for brazing and, in view of the results and material costs, the copper-based alloy CuAl7 was selected for the main investigations. All brazing alloys show good mechanical properties, even for heavy plate joints, which in some cases can be above the basic material level of normal strength structural steels. In the majority of the joints, LMPs (Liquid Metal Penetration) occurred in the area of the diffusion zones, but no negative influence on the mechanicaltechnological properties could be proven.
Based on parameter studies and numerous brazing tests, best-practice framework conditions and preliminary brazing process specification (pBPS) were formulated for the respective processing. The seams of the test specimens were characterized microscopically and with regard to the hardness curves, residual stresses and distortion. Despite the considerably lower energy input compared to welding, brazed joints show a similar residual stress level at the base of the seam and a similarly strong tendency to distortion. This is due to the significantly higher coefficient of linear thermal expansion of the Cu-alloy with a good high-temperature strength.
Within the framework of the fatigue strength investigations, the geometries of the brazed details, base plate thicknesses, base material strengths and load conditions were systematically varied on arc brazed specimens and compared with welded reference specimens. For this purpose, a total of 11 Wöhlerlines were recorded. As brazed or welded details, plates/doublings as well as welded bushings typical for towers for wind energy plants were used.
The observed failure characteristic of the details with brazed attachments is comparable with welded details. Starting from the weld seam transition, a fatigue crack develops in the base material, which finally leads to failure of the component. The slope of the Wöhler line is comparable with that of welded details (m ≈ 3). The fatigue strength is considerably higher for the brazed details. For the brazed bushings, an overall notch case Δσc = 100MPa could be determined from the tests. The brazed-on plates and lamellas provided a notch class Δσc = 80MPa.
On the 20 mm thick and 40 mm thick base plates investigated, no plate thickness influence could be observed. The numerical investigations suggest that no geometric plate thickness influence is to be expected even in the range above 40 mm plate thickness. The geometry of the brazed plates only influences the fatigue strength in the case of geometries with very small diameters. The plates with a longitudinal diameter of 500 mm show no statistically significant difference in fatigue strength compared to components with a longitudinal diameter of 75 mm. The experimental investigations could not prove a correlation between the fatigue strength of brazed attachments and the strength of the base material.
In order to be able to formulate a static design approach for arc brazed joints, small size tensile specimens were taken from brazed seams on steel and copper blocks. The tensile strengths determined varied in some cases considerably between the brazing details taken (fillet brazed, bead on plate) and the substrate used (steel, copper) for the same energy input. This leads to the conclusion that the cooling conditions and the degree of dilution have a significant influence on the seam strength. It was found that high cooling rates and mixing with iron substrate, which acts as a fine grain former in copper, leads to high strength. The results obtained were compared with the static tensile and shear tests. Structural component tests on fillet welds to determine the static strength of the CuAl7 brazing material could show that the failure takes place in the seam in the same way as with weld details. The strength of the filler metal is comparable to that of filler metals made of normal strength steel. A method for weld seam design was presented which is based on an existing verification format in the Eurocode.
In conclusion, it was possible to show by means of an economic analysis using the example of welded / brazed bushings that the use of arc brazing is considerably cheaper than the combined use of the welding process and post-weld treatment to increase the fatigue strength. This is due to the fact that no additional post-treatment step is necessary and the resulting labour costs are saved as cost drivers. 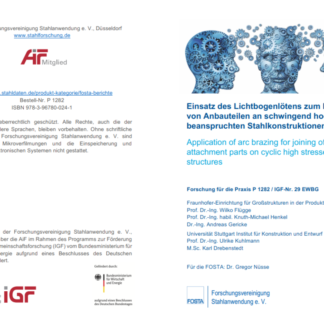