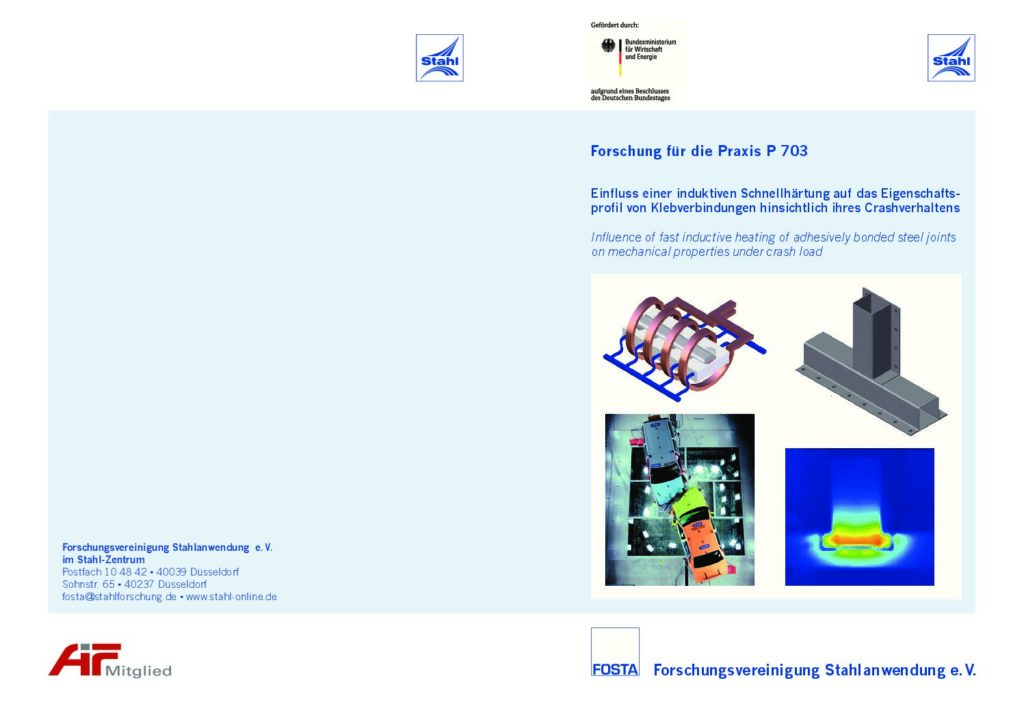 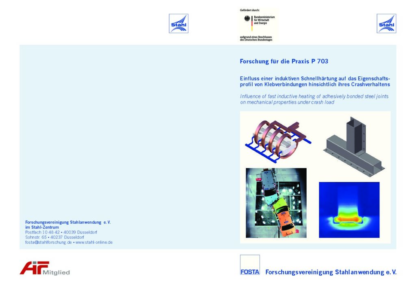 Aim of this research project was the determination of the influence of an inductive adhesive curing process on joining properties, particularly under impact load. Inductive heating, used for accelerated curing applications for adhesives, has been developed as an important manufacturing technique in industrial production processes, as it helps to reduce process time. It allows a quick handling strength of bonded components  immediately after the bonding process and it increases the outwash resistance of adhesive layers in the subsequent cataphoretic painting and other cleaning processes.
As the first part of the conducted investigations, four epoxy resins, based on one and two components have been previously selected under the aspect of a satisfying crash absorbing behaviour for serveral tests. Investigations, concerning the reaction kinetic behaviour at bulk- specimens show a specific curing behaviour in dependence of the chosen heating rate. Analyses of the viscoelastic material behavior of inductively cured specimens show a change in the glass transition area and the stiffness compared with conventional oven cured specimens. As critical parameters of the induction heating process, the chosen heating rate and the curing temperature could be identified. Therefore, lower curing temperatures and heating rates should be selected to avoid bigger changes in the adhesive properties.
Further investigations with bonded specimens, for example the thick tensile shear specimen show for inductively cured bonds lower  maximum shear strengths and shearing strains at break. The induction heating process reduces the crash   performance of the investigated adhesives.
Attempts to single lap shear specimens bonded with a non alloyed steel and a dualphase steel show that the influence of induction heating may differ in the mechanical properties in  ependence of the material strength and surface.
Impact tests conducted with a t-joint specimen verify a good comparability with results from previous studies on single lap shear specimens.
With the knowledge gained from this project, both quantitative and qualitative assessment of the crash behaviour of inductively cured bonds can be made.
The research project (IGF-Nr. 16586 N) was carried out at Laboratorium für Werkstoff- und Fügetechnik, Universität Paderborn. FOSTA has accompanied the research project work and has organized the project funding from the  Federal Ministry of Economics and Technology through  he AiF as part of the programme for promoting industrial cooperation research (IGF) in accordance with a resolution of the German parliament. 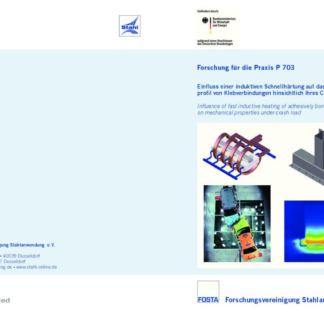