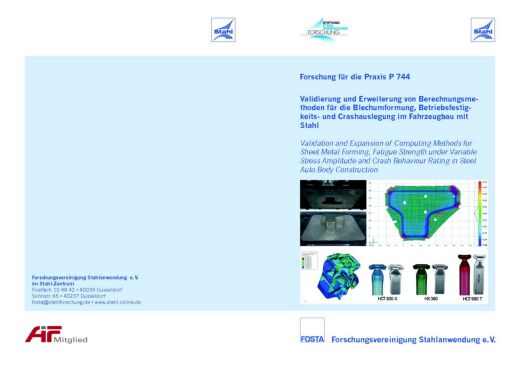 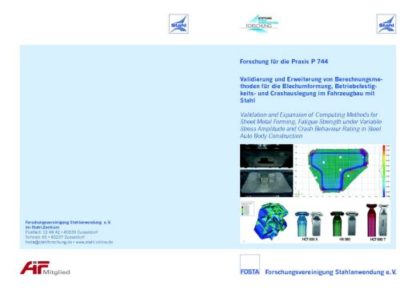 The present report continues and concludes the preceding two research projects carried out in close cooperation between steelmakers, research institutions and automotive manufacturers. In the two previous projects, the focus of interest had lain on determining the material characteristics of current sheet steel grades and on creating a mathematical model for describing the flow curve. The aim behind this latter effort is to shorten development cycles in automotive manufacturing. Apart from the characterization of sheet steel grades, the Testing and Documentation Guideline (PuD, now SEP 1240) was developed which provides for a standardized test implementation, analysis and data presentation. The key goal of the present project was to validate and expand the models developed to date for mathematical determination of plastic and cyclic material characteristics and to develop guidelines for the use of the appropriate parameter sets, taking into account the classification of steel grades into steel families.
For the purpose of surveying elastic/plastic characteristics of materials by tensile testing, their modulus of elasticity was determined in the “as delivered” state, after prestraining, and after prestraining and heat treatment (W170). The  directionality of the moduli of elasticity remains evident after prestraining. However, after prestraining by a mere 2%, the modulus of elasticity typically begins to decrease substantially. Heat treatment fully eliminates this decrease in the modulus of elasticity induced by prestraining. The directionality of the “as delivered” state is recovered after the W170 treatment. With some steels, the values obtained after 10% prestraining are even higher than in the “as delivered” state.
In addition to the assessment of ductility and elastic recovery it was intended to establish a procedure for the systematic obtention of material characteristics for simulation purposes. It emerged that the micro-alloyed steels can best be modelled using a combination of the flow curve approximation according to Estrin-Mecking and a yield locus curve according to Hill48, whereas with other steels the best results were obtained using the yield locus curve according to Barlat89. On the basis of this investigation, no general recommendation should be pronounced for modelling any given steel grade or type. In order to validate the model from the second material characteristics project, dynamic tensile tests at room temperature were carried out. As anticipated, all materials showed a positive strain rate sensitivity. In addition to the classic tensile test, bulge tests, shear-tension tests and stack compression tests were carried out to examine the material’s behaviour at high strain levels. A comparison of the diverse test types shows that, except for the material S460MC, the largest degrees of deformation are always attained in the bulge test. Stress levels are in all cases higher in the shear-tension tests (across all material classes), whereas the strain-hardening behaviour described in both test types is approximately the same. In the case of the high-strength materials the stress levels match but the strain hardening behaviour mappings no longer coincide. The same behaviour is observed in the stack compression tests.
For application of the developed model and of the model expansion, quasi-static family parameters were determined to enable predictions of material behavior even for materials that were not considered in determining the computing parameters. It was found that such predictions can indeed be made, with attendant reductions in experimental efforts and costs. This is despite the fact that, as one would expect, the results of a familybased fit are less accurate than for a specific (individual) fit. The accuracy of the conclusions derived for a purely quasi-static load case is clearly higher than that of  dynamic tensile test data. Overall, prediction accuracies are higher for single-phase steels. With a view to validating the model for steels containing residual austenite, in-depth literature research was carried out.
Models relying on a Kocks-Mecking approach were presented. It was demonstrated in this project that the latter can be combined exceptionally well with themodel created here, thus improving the prediction accuracy of the given calculation.
For the cyclic parameters, the procedure described below was employed in line with the concept of the
development of mechanism-related assessment methods. Since the LCF tests per SEP 1240 involve no collection of fracture parameter measurements, damage models delivering evaluations on this basis are ruled out a priori. However, using the method proposed by Heitmann, it proved possible to derive a damage parameter based on experimentally determined Manson- Coffin parameters from which the number of cycles to failure can be estimated. It was demonstrated how the
elastic and plastic portions of the strain-life curve of (unknown) materials can in turn be estimated on the basis of these findings. However, the prediction quality of this model is lower than that of other model, such as Wagener’s, since the crack propagation parameters are not based on yet unavailable test results but had to be themselves estimated from models. Furthermore, it was examined whether any residual austenite transformation of TRIP steels which may occur as a result of cyclic deformation can in fact be demonstrated.
To this end, residual austenite levels were determined by X-ray measurements in deformed and undeformed specimen regions and as a function of the preset strain amplitude. For the materials investigated here and for the strain amplitudes employed, the differences observed at room temperature and slightly elevated temperatures ranged within the measurement uncertainty of the measuring method. However, at -40 °C, an almost complete residual austenite transformation could be demonstrated.
The research project was carried out at Bundesanstalt für Materialforschung und -prüfung (BAM), Berlin, at Institut für Eisenhüttenkunde der RWTH Aachen (IEHK), Aachen, at Institut für Maschinelle Anlagentechnik und Betriebsfestigkeit der TU Clausthal (IMAB), Clausthal, at Fraunhofer-Institut für Betriebsfestigkeit und Systemzuverlässigkeit (LBF), Darmstadt and at Stahlinstitut VDEh, Düsseldorf, FOSTA has accompanied the research work and has organized the project funding from the Foundation for Steel Application Research. 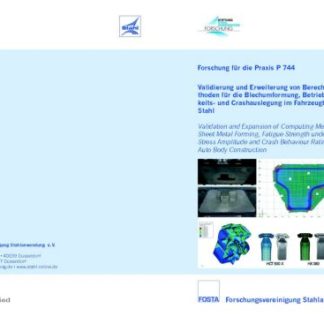