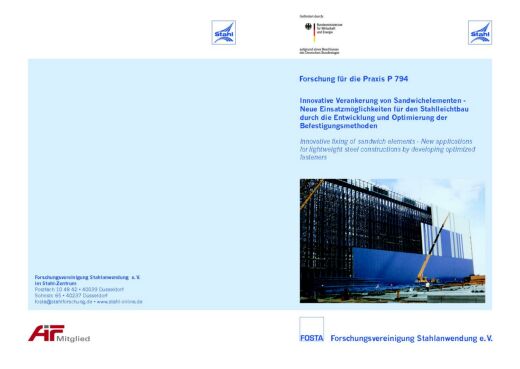 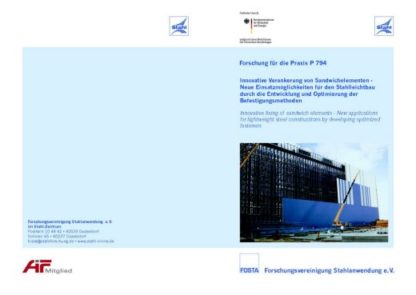 Especially for industrial buildings sandwich panels are often used as facade elements for roof wand walls. Sandwich elements are composite panels with metallic outer face sheets and an inner heat-isolating core. For building applications these are often steel face sheets and a polyurethane insolation core.
Sandwich panels are fixed to the load bearing substructure by screws which have to have a technical approval. As long as there is no indirect fixation within the joint between two neighbouring panels, the panels will be fixed directly to the substructure by pushthrough mounting. This kind of fixation has some disadvantages though. First the screw heads are visible on the façade from the outside, second the screw is a thermal bridge within the isolating panel. For these reasons an inner fixation of the panel, which does not push through the panel is meaningful. Additionally such a fixation at one side of the panel can also be used to apply loads into the sandwich panel, for example by anchoring suspended lines.
Within this research project extensive experimental, numerical and analytical investigations were performed in order to develop possible solutions for one-sided fixations for sandwich panels. Therefore the load bearing behaviour of sandwich panels subjected to localised loads was investigated first. Based on the general research results on this, different solutions for onesided fixations were considered and developed. Within these investigations screws for thin-walled sheets were tested, adhesives were applied to the outer face sheet and the inner core and an undercut within the core were considered and tested successfully.
Finally it was shown that one-sided fixations are not only possible for sandwich panels but also meaningful in some cases. Based on the results of this research project onesided fixations can be further developed and brought into readiness for start of production.
The research project (IGF-Nr. 16066 N) was carried out at Technischen Universität Dortmund vom Lehrstuhl Stahlbau. FOSTA has accompanied the research project work and has organized the project funding from the Federal Ministry of Economic Affairs and Energy through the AiF as part of the programme for promoting industrial cooperative research (IGF) in accordance with a resolution of the German  parliament. 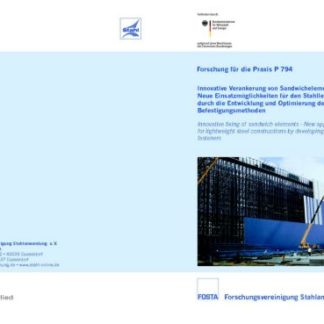