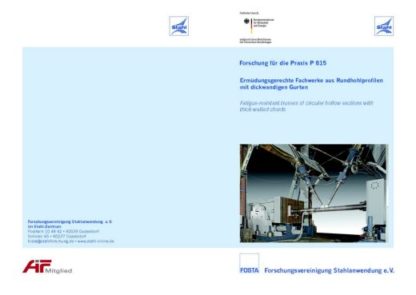 Welded structures made of circular hollow sections under fatigue loading are widely used in civil, mechanical and plant engineering. Welded tubular K-joints, whereby the chord together with two braces forms a lying K, are particularly frequent and therefore the subject of this research project. In the recent past, more and more thick-walled structures with a chord slenderness r0/t0 < 12 are required, but no appropriate rules are available for their realization.
As consulting engineers and manufacturing companies normally do not have the economic background for financing individual test series with cost-intensive fatigue tests, there is the need for practical guidance covering the construction and the design of welded thick-walled tubular trusses with fatigue loading. Hence, there is a great potential of saving costs and material in particular for small and medium- sized companies. Therefore, the research project was extensively dealing with the fatigue behavior of uni- and multiplanar Kjoints in thick-walled tubular trusses in a holistic view. The goal of the research project was to develop recommendations for a fatigue-appropriate and at the same time economic realization of such structures.
In the research report the state of the art is summarized especially focusing on the fatigue behavior of thick-walled tubular structures from which open ques-tions and the work packages of the research project were derived.
In terms of fatigue particular  recommendations for the planning and fabricating of structures made of welded circular hollow sections were acquired. Addressing the needs of practitioners a combination of butt and fillet weld for the brace-to-chord intersection was considered. This kind of joint has on the one hand technological and on the other hand economic advantages over a butt-weld joint. For the determination of the fatigue strength of thick-walled tubular structures an extensive test program was carried through comprising component fatigue tests under brace loading, chord loading and combined loading. Furthermore, a large-scale girder test was performed. On the one hand, particular focus was laid on the size effect in the component fatigue tests. On the other hand, the investigations of the influence of post-weld treatment on the fatigue resistance using the meanwhile commercially available high-frequent hammering technology formed the main part of the work. These investigations were complemented by several small-scale test series which revealed important information concerning the evaluation of post-weld treated tubular structures and the evaluation of repair weldings.
The research project (IGF-Nr. 15675 N) has been carried out at Universität Stuttgart, Institut für Konstruktion und Entwurf and at Universität der Bundeswehr München, Institut für Konstruktiven Ingenieurbau – Stahlbau, at Hochschule München on Labor für Stahl- und  Leichtmetallbau and at Schweißtechnischen Lehr- und Versuchsanstalt Halle GmbH. FOSTA has accompanied the research project work and has organized the project funding from the Federal Ministry of Economics and Technology through the AiF as part of the programme for promoting industrial cooperation research (IGF) in accordance with a resolution of the German parliament. 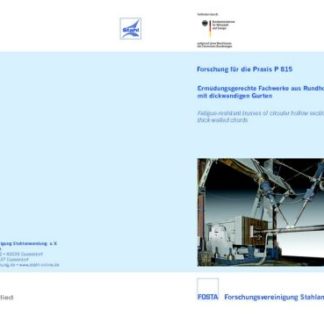