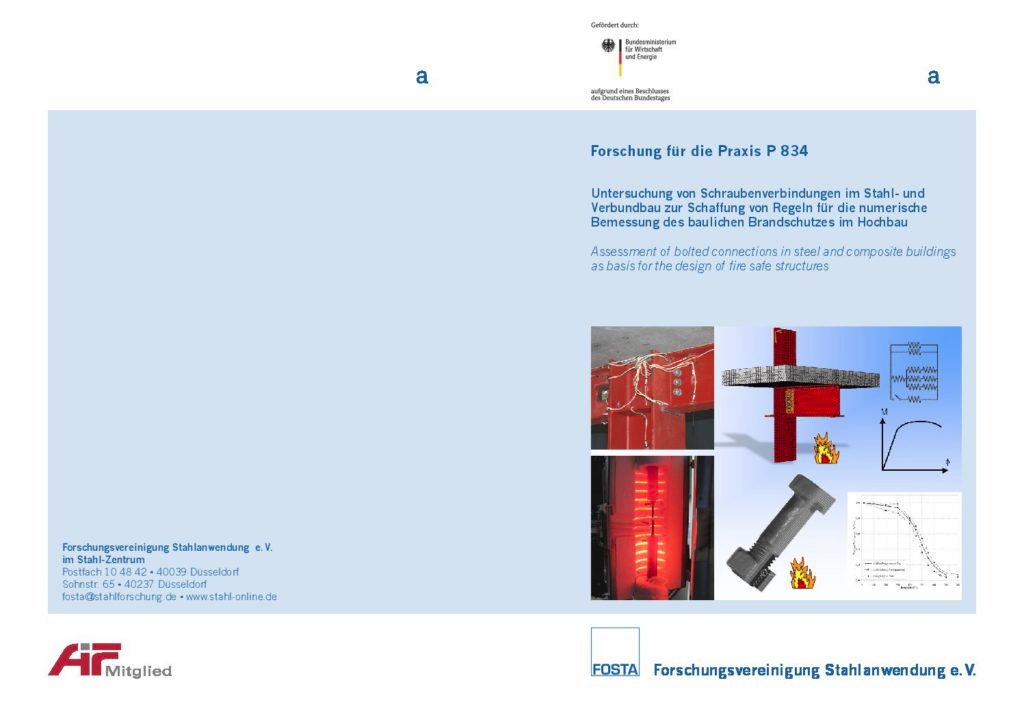 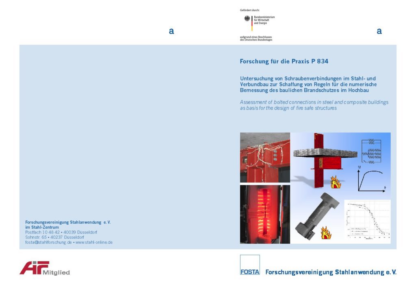 In this research project, investigations in the behaviour of connections in steel and composite structures with grade 10.9 high strength bolts in fire are conducted. Recently, a global approach in analysing the behaviour of buildings, taking into account the whole structure including connection behaviour, is becoming suitable for practical application at ambient temperature. In fire situation this is not the case because the component method for the design of connections is not valid for elevated temperatures. In addition there are no validated material properties for grade 10.9 high strength bolts in fire available. The first aim of this project is to determine material properties for these high strength bolts during and after fire. For this reason material tests with fixed and transient temperatures, as well as tests with axially and transversally loaded bolts are conducted.
The investigations show that at temperatures up to 420°C bolts fail by stripping of the thread, which is usual at ambient temperatures. At temperatures between 420°C and 650°C the bolts fail due to a crack in the root of the thread. This failure is caused by liquid metal embrittlement (LME). Above temperatures of about 650°C, bolts fail by stripping bending of the thread. So the results of this part of the project are validated temperature and time dependent material and bolt properties, which take into account these different failure modes at different temperatures. In the second part of the project thermal and mechanical numerical models are developed, which are able to simulate the behaviour of endplate and fin plate connections in steel and composite constructions. These models are validated by two full scale fire tests with common connections. Within the tests and the simulations, transient temperature fields based on the ISO-fire curve and usual fire protection by  intumescent coating are taken into account. An endplate connection within a steel structure and a fin plate connection within a composite structure are investigated. The fin plate connection is usually considered as being a pinned connection at   ambient temperatures. It is shown in this project that a significant moment resistance can be activated in fire, if early failure of the reinforcement is prevented. Additionally, pring models, based on the component method,  are developed, which can be used to determine the strength and stiffness for both connection types in fire situation.
Based on the results of this research project, it will be possible to determine the moment-rotation-behaviour of different connections in fire to use them in a global structural analysis. This connection behaviour can be determined by finite element or spring models, both based on validated bolt properties.
The research project (IGF-Nr. 16586 N) was carried out at Gottfried Wilhelm Leibniz Universität Hannover vom Institut für Stahlbau und an der Technischen Universität Darmstadt vom Institut für Stahlbau und Werkstoffmechanik. FOSTA has accompanied the research project work and has organized the project funding from the Federal Ministry of Economics and Technology through the AiF as part of the programme for promoting industrial cooperation research (IGF) in accordance with a resolution of the German parliament.

You're viewing: P 834- Assessment of bolted connections in steel and composite buildings as basis for the design of fire safe structures 60,00€
Add to cart