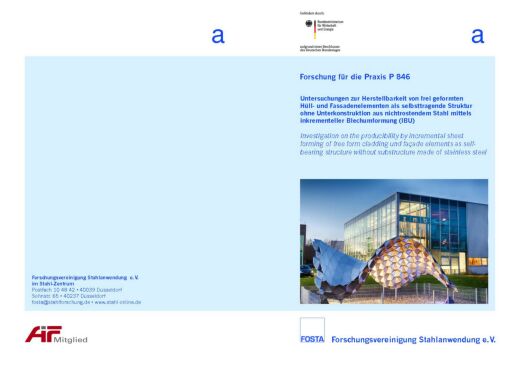 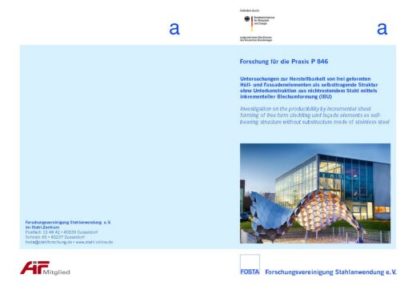 The wish for individualized products has continuously grown over the last decades. In the construction sector this is expressed in a higher geometrical diversity, like particularly in freeform architecture. Due to missing universal and mature construction methods for freeform buildings they are usually realized applying customized solutions. However, these often  include massive, material-consuming substructures, whereas the outer visible skin has neither structural nor functional properties.
In this context the research report presents a new concept for self-supporting lightweight structures for the realization of freeform surfaces. The concept utilizes a double-layeredstructure that integrates load-bearing, functional properties and façade design in one unit. In general a combination of tessellation and folding enables the generation of selfsupporting sheet metal structures. Within the described research project this method has been applied to complex freeform geometries. The developed flexible manufacturing chain is mainly based on incremental sheet forming (ISF) and allows for the production of the required façade elements. This process is even applicable in the case of freeform designs, whose geometrical  approximation inevitably generates a large amount of individual components.
The holistic optimization of the introduced construction concept has particularly been possible due to the close cooperation of architects, construction engineers and production engineers. The entire process chain from the initial design to the final assembly as well as the corresponding interactions have been analyzed and matched. Furthermore, the whole construction concept has been implemented in a custom software-tool including all details with regard to the design elaboration as well as production, joining and assembly concepts. Thus, the created software-tool supports a production and assembly oriented planning  and automates all necessary steps within the design and detailing procedure. For the final assembly process a joining and assembly concept has been developed, which takes advantage of the self-supporting characteristic of the designed structures and permits to assemble all single components without any additional auxiliary constructions.
The prototype building impressively shows that the developed construction concept allows for the realization of self-supporting freeform structures, e.g. for roof or façade applications. The calculated realization costs including production and assembly are below 2700 €/ m². This represents a competitive range considering the high geometrical flexibility of the system. The high potential of the construction concept in terms of lightweight design is confirmed by its surface weight of less than 16 kg/m².
The described concept is able to establish new applications of metallic constructions in modern architecture and design. In the  metalworking industry new business segments can be launched offering the flexible production of sheet metal  components by adapting the developed ISF-based manufacturing chain. Altogether, both the application fields as well as the geometrical flexibility for sheet metal constructions have been widely extended. This will certainly have a positive impact on the market for raw materials and semifinished products.
The research project (IGF-Nr. 16603 N) has been carried out at Institut für Bildsame Formgebung und vom Lehrstuhl für Tragkonstruktionen of RWTH Aachen. FOSTA has accompanied the research project work and has organized the project funding from the Federal Ministry of Economics and Technology through the AiF as part of the programme for promoting industrial cooperation research (IGF) in accordance with a  resolution of the German parliament. 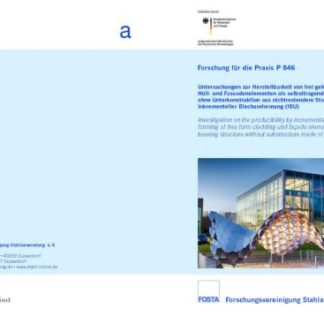 You're viewing: P 846 – Investigation on the producibility by incremental sheet forming of free form cladding and façade elements as self-bearing structure without substructure made of stainless steel 40,00€
Add to cart