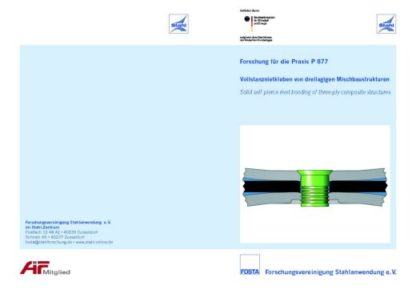 For the joining of high-strength multi-material compounds especially the solid selfpiercing riveting combined with an adhesive joining process owns a large application potential. The study focus of this project is the joining process combining solid selfpiercing riveting and adhesive bonding of three-layer multi-material compounds with the aim to determine the capacity of the joining system.
Within the scope of this research project investigations of the elementary solid selfpiercing riveting and adhesive bonding as well as the hybrid process of both joining techniques were executed. Thus both the starting point of elementary joining processes was recognized and the extraordinary application potential and the demand for development of the hybrid joining technique were made accessible. Thereupon on the basis of the obtained findings approaches to process improvement were derived and their influence on the joint formation and the load bearing capacity of the joint could be checked. Furthermore, these optimization steps were used for the development of the process.
With respect to the hybrid joining method solid selfpiercing riveting combined with adhesive bonding problems were presented, which result from the high process forces in interaction with the tribological system. Based on the presented coherences was the change of the functional principle of the self-piercing riveting tools a significant aspect of the investigations. The redesign of the tools resulted in the avoidance of critical adherend deformations and an optimized adhesive connection and a homogeneous adhesive layer formation. Here, a one-piece die concept was maintained and updated by an adjusted basic Funktiform. The capacity of the optimized joining technique has been demonstrated by comparison investigations with a multi-part die concept.
The optimized tool designs were further illustrated by load capacity investigations of elementary and hybrid joined compounds under static and sudden load application. Compared to the start situation of the elementary joining process the maximum strength and energy absorption of the  compounds could significantly increase.
Finally, the resulting findings of the research respective the hybrid joining process are derived as production  recommendations.
The research project IGFNo. 16820 N from the esearch Association for Steel Application was supported by the Ministry of Economic Affairs and Energy through the German Federation of Industrial Research Associations (AiF) as part of the programme for promoting industrial cooperative research (IGF) on the basis of a decision by German Bundestag. The research project has been carried out at Laboratorium für  Werkstoff- und Fügetechnik der Universität Paderborn. 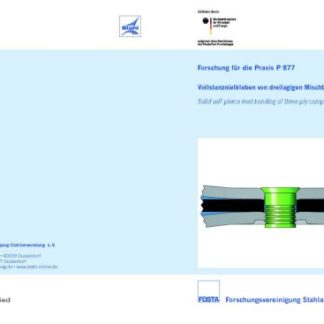