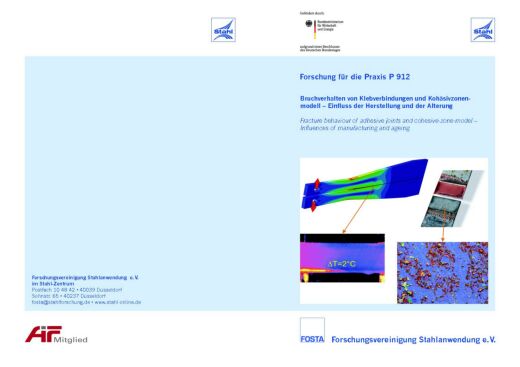 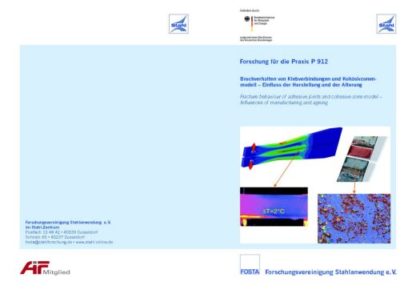 Part of AiF/DFG-Cluster: Understanding and calculationof resistance of bonds (BestKleb)
Four connected topics have been subject of this research project which  contributes to the project cluster “BestKleb”. The first topic was concerned with the finite element simulation of adhesive joints using cohesive zone models. This kind of models exhibits a high efficiency. Using parameters  identified in this project, it was employed for civil  engineering applications in BestKleb projects 7 and 8. A material model developed in BestKleb project 3 was transferred into a cohesive zone model considering effects of temperature, humidity, and adhesive layer thickness. Furthermore, new methods to consider the restriction of lateral contraction in cohesive zone models have been  developed. They achieved a significant improvement in theprediction of joint stiffness.
One basic parameter of  cohesive zone models is the critical strain energy release rate GIc of crack growth in the adhesive layer. The second focus of the project aimed at improving the understanding of this quantity. Two  methods have been developed which enable a first estimate of the energy balance during crack growth. The first  approach uses a simulation of the TDCB test considering both crack growth and plastic deformation of the adhesive layer. The second approach extends the  TDCB test by a measurement of surface temperature using an infrared camera and allows to evaluate the amount of heat  generated at the crack.
The critical strain energy  release rate GIc was investigated in the third part of the project concerning ageing. In this work closely related to the BestKleb projects 1 and 3  several adhesives have been tested. A method to predict the effect of water diffusing into the adhesive layer was developed for a polyurethane adhesive.
The fourth topic dealt with a procedure used to improve the ageing resistance. The increasing use of adhesive technology requires a stable process to achieve a load bearing connection despite adhesionreducing  contaminations. Already marginally surface adsorbents can lead to the failure of a bonded joint due to a weak interface. Therefore a contamination tolerant process is needed. By means of power ultrasound it is possible to remove surface contaminations to improve an adhesive bonding process with contamination tolerance, so a reproducible strength can be ensured.
Within the project cluster “BestKleb” it was discussed under which conditions the adhesive systems are suitable for supplying power  ultrasound. Therfore the influence of power ultrasound on the chemical (IR-ATR) and  mechanical properties (DSC, DMA, tensile strength) of the adhesive system were  investigated. For each adhesive system the optimized  ultrasonic parameters were determined. These parameters ensure a high cleaning efficiency while the curing kinetics/pot life is only minor influenced. Subsequently the influence on the ageing  resistance was examined by destructive tests.
The research project IGF-No. 17276 N from the Research Association for Steel Application was supported by the Ministry of Economic Affairs and Energy through the German Federation of Industrial Research Associations (AiF) as part of the programme for promoting industrial cooperative research (IGF) on the basis of a decision by German Bundestag. The research project has been carried out at Fraunhofer-Institut für  Fertigungstechnik und Angewandte Materialforschung IFAM, Bremen and at Wehrwissenschaftliches Institut für Werk- und  Betriebsstoffe (WIWeB), Erding.

You're viewing: P 912 – Fracture behaviour of adhesive joints and cohesive- zone-model – Influences of manufacturing and ageing 40,00€
Add to cart